An Unexpected Journey into Livestreamed Concerts 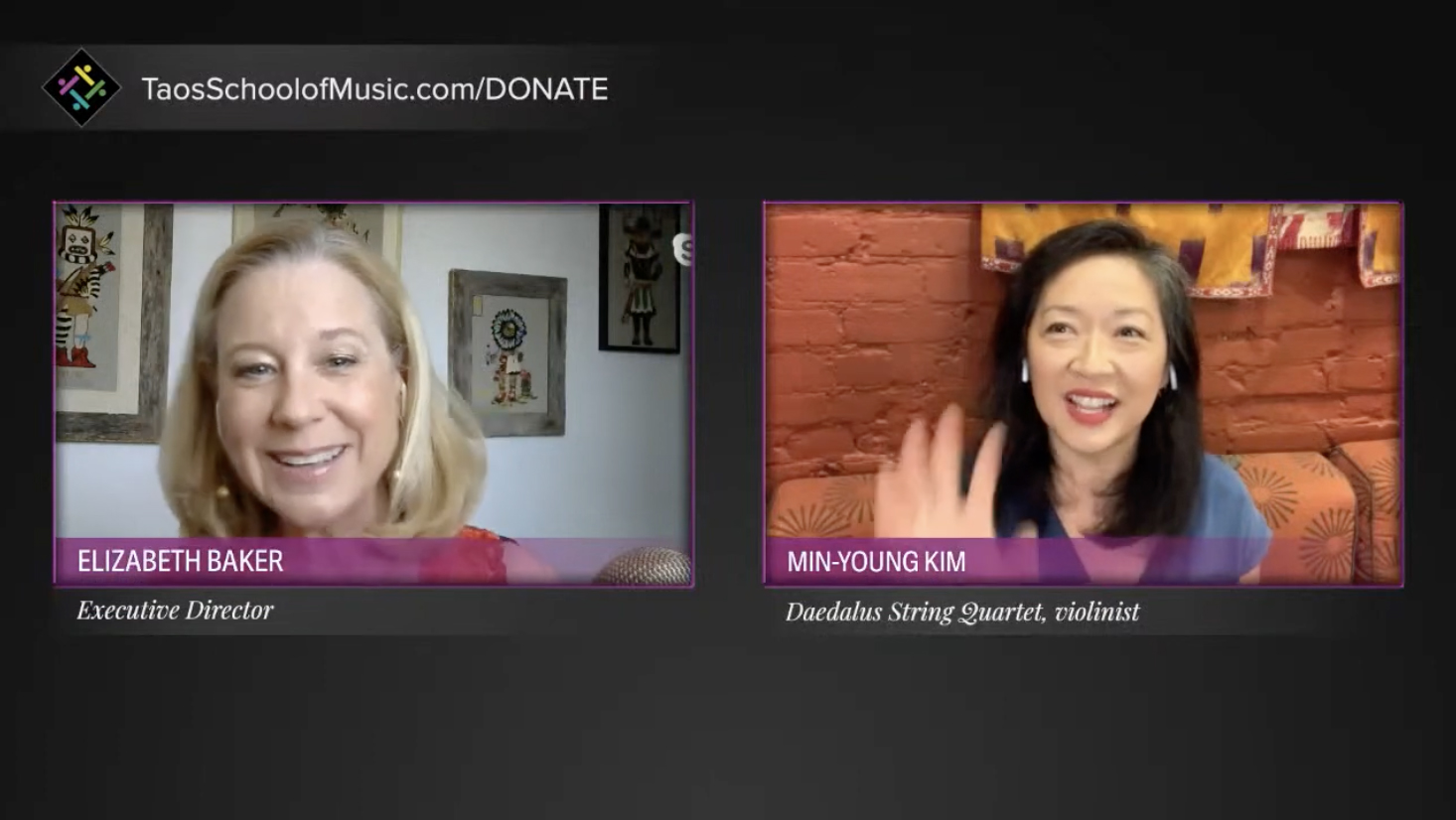 The day after the final concert of the Taos School of Music Chamber Music Festival is full of tasks, primarily focused on moving out of the St. Bernard Hotel which has been the host of the school all summer. Piano movers arrive to move the pianos back to their post festival locations. Chairs, music, and a host of supplies are loaded into a volunteer’s truck and moved into storage. The hotel rooms are emptied of items left behind by the students. You’d be surprised what they leave behind. This takes up most of the day and sometimes continues into the next day depending on the weather. This is what would have happened had not COVID inserted itself. But I digress.

At the beginning of this year I was focused on finalizing student applications and arranging auditions for January/February. This virus, now known as COVID-19, did not immediately register as something to be concerned about. I was also looking forward to settling more comfortably into the rhythm of running the school as last year had been my first full summer at the helm. It had been a very challenging summer likening it to drinking out of a firehose. But I had survived. Things had very gone well, with only a few mishaps. This summer was going to be much easier, now that I’d had a full year on the job.

Within a matter of weeks we were all thrust into a new reality; of isolation, masks, stay at home orders, and social distancing. Like most directors of summer programs I kept hoping that a way could be found to get the faculty and students safely transported to Taos and at least keep a hold of the “school” part of the program. A way would be found to live stream concerts from the St. Bernard to our music lovers and supporters. Alas, my hopes were dashed as the Town of Taos and the Village of Taos Ski Valley shut down in short order for the health and safety of everyone.

What were we to do? My brain just could not accept that there would be no music at all in Taos this summer. And then, an idea was born. What if we could access our archives of Young Artist concerts and invite our faculty to submit programs and seminar focuses? We could use our website as the vehicle by which a Virtual Festival could be held. I had no idea how this could come about, but I knew that this was doable. What I did not realize was that I had just created a new job for myself and had no idea of the amount of work that awaited me. This was to be another summer of drinking out of another type of fire hose.

Susan Preston, our web designer and a fantastic advisor, was brought on board to assist with putting this festival together. This is where my woeful tech skills were brought to light and I got a crash course in setting up, and learning how to negotiate, new apps to make this happen from my end. There were many times when my head felt like exploding, and I wanted so much just to walk away from it all. However, it was my deep conviction to serve our Taos family that kept me going.

To start the process, our faculty made some initial recommendations for past young artist performances that stood out in their memories. Those recommendations became the starting point to my search. I began a spread sheet to get organized. Several of those recommended recordings were missing, or were available in audio form only. The process was hit and miss and, at times, very frustrating. Hours were spent combing through archival recordings. During a four day period I must have listened to over 25 hours of recordings to find a good selection from which 16 performances would be chosen. Finally Artistic Director, Robert McDonald and I collectively spent 4 to 5 hours programming what would become the 8 Young Artist programs. Unfortunately so many fine performances did not make their way into the Young Artist concerts. I hope our alums will understand if one of their performances did not get selected.

All of these performances were then organized into file folders along with all the program details. I must say that this was very time consuming and tedious. But it got done, and when the day came when I attached all 8 programs with recording files and program details and pressed SEND, a very large load was lifted off my shoulders.

Radio spots for KTAO were recorded on a voice recorder app on my phone and sent to the station to process. Our PR Coordinator, Ariana Kramer and I were in regular contact about press releases and such. Scripts for each virtual concert needed to be written, and it got easier to write them as the concerts went on. Rehearsals with the faculty were scheduled in preparation to join me in live hosting our Young Artist concerts. We were handed a real gift when PerformanceToday and YourClassical reached out early on to cross post our concerts on their Facebook pages. From this, we were able to share the magic of Taos with hundreds more across the nation, and the world!

What gave me the strength to see this project through was the encouragement from our Taos School of Music Family; our alums, board, and concert goers. Donations are still coming in as a reminder of the strong community that cares deeply about the transformation experience the Taos School of Music provides. Our two matching fund challenges, launched before the festival began, were met within three days of being launched. I have been humbled by the generosity of so many.

So Much to Be Thankful For

Looking back, I am grateful our Board agreed to support my idea of this Virtual Festival. I knew that it could work; I just didn’t know exactly how it would. It made it possible to keep our promise to our community to keep chamber music alive in Taos this summer.

There are those that I wish to thank from the bottom of my heart for, without them, this festival would not have been able to be realized; Nick Kitchen who has recorded years of young artist concerts, Susan Preston who put all the pieces together and was the mastermind behind the scenes to produce live stream concerts, Ariana Kramer for her efforts in getting the word out to press/print/radio, our devoted faculty who sent in their recordings and appeared with me on the live stream concerts, and all those who chose to take the time to show up and view our offerings of exceptional chamber music performances.

All in all, I am pleased with how things turned out. Technical problems were few and far between. I learned to be more relaxed during the live streams. Our concert goers and alums were generous with their comments and feedback.

One of my favorite quotes is from Yuri Kim who says, “Bravo to you for your endless love for music, students, and artists.” Thank you, Yuri.

This may have been an unexpected journey, but a journey well taken.